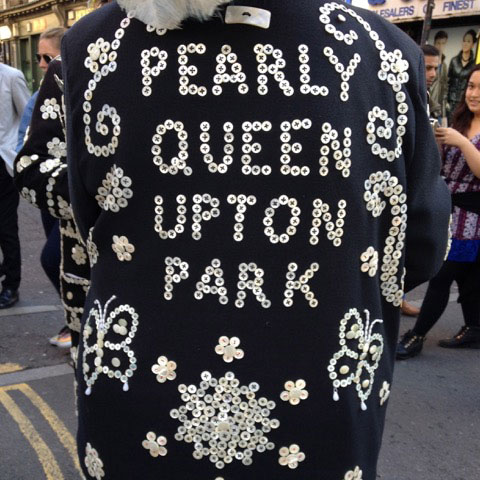 I was so lucky today to see some Pearly Kings and Queens today on Brick Lane. A walking work of art, they still keep the tradition alive, giving their time collecting for charity. There is still a pearly king and queen for each London borough. Pearls were fashionable with wealthy west end society in the 19th century and London market traders imitated the look decorating the seams of their battered trousers and old waistcoats with pearl (mother of pearl) buttons they found.

Henry Croft , a road sweeper started the ‘pearlies’ Sweeping the streets he collected all the pearl buttons that had fallen off peoples clothes, starting with his cap he went on to cover his whole suit realizing that attracting attention was the key to collecting money for charity.

The designs are lovely patterns and symbols  like a horseshoe represents good luck, doves are for peace. All the buttons are sewn on separately by hand with waxed buttonhole thread, a considerable task when a mans suit may take 30,000 buttons. It is still the case that the Kings do all the design and sewing –  mans work!

Henry was born and raised in an orphanage in Charlton Street, Somers Town, London, NW1. At the age of 13 he had to leave the orphanage and make his own way in life. His first job was as a Municipal Road Sweeper in the market of Somers Town. Henry worked hard in the market and soon made many friends, he was particularly drawn to the Costermongers who were a tough breed of market traders. He got to know more about their way of life, their generosity and their fashion of smoke pearl buttons sewn on the piped seams of their trousers, jackets, waistcoats and caps. This showed their status as they worked the market stalls from day to day. The Costermongers were caring and looked after each other if they were sick or in need.

Henry was so fascinated by this way of life and decided he would like to help those who were more unfortunate than himself, including the children back at the orphanage where he had spent his early life. He knew that in order to collect a lot of money he needed to draw attention to himself. So as Henry swept the market streets he started to collect all the pearl buttons he found that had fallen off of the clothes of people visiting the market.

Henry Croft was in so much demand for his charity work, as many of London’s hospitals, workhouses and orphanages needed help, that he turned to his friends the Costermongers and they did not let him down. Many of the Costermongers became the first Pearly Families. There were 28 families, one for each of the London boroughs, one for the City of Westminster, and one for the City of London.